There have been quite a few custom drum wrap companies popping up here and there lately. For a while there was only one that was owned by a well known drummer but now there are quite a few. This review is on one of the newer people coming into the game…or at least the newest one that crossed into my RADAR.
They are called Bum Wrap Drum Company, They are based out of Maryland and sell primarily on ebay. After finding them on ebay I looked to see if they had a Facebook page (who doesn’t have one?) and contacted them for a price list. They returned my email quickly and offered to send me a sample of their wrap. They asked what size I would like and told me they would send it out.  Of course I accepted and waited for my sample to arrive. About a week later it showed up on my doorstep. They actually sent me quite a few samples since I had told them I was going to write this review. 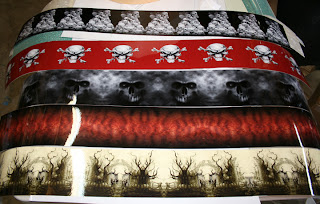 I was very impressed with the wrap samples I got! One of the biggest problems I had with the “original” custom wrap company was that the images on the wrap weren’t always sharp. Some even were slightly blurry, but Bum Wrap’s images are SHARP. They look great and the wrap is sturdy! I’ve ordered wrap off ebay before only to find that it’s about as durable as shelf paper…not something you want to put on a production drum. Bum wrap is maybe slightly thinner than standard wrap but not much. Sorry, I don’t have the specs on their wraps.

Their webpage is www.bumwrapdrumco.com, it has quite a few standard samples but nothing close to what they can do.  I wish they would put some of the samples they sent me on it because they’re pretty impressive. Their Facebook has some additional samples.
So if you’re in the market for affordable custom wrap, I recommend Bum Wrap Drum Co. They can do pretty much anything you can imagine. So check them out and tell them PJ sent ya!

I do have a couple pieces of wrap for a giveaway! I have chosen a couple pieces that I am going to use for drum builds and I have some left over, not that I don’t want to use it, but because I want to help them get their product into other people’s hands. The wrap pieces measure 4.5” x 46” so basically they will work on a 4.5 to 5x14 shell. I am only going to give one piece away at this time, I will do another give away at a later date. Below is the sample that is up for grabs.  To enter into the contest, you must go to their Facebook, www.facebook.com/Bumwrapdrums, and post a positive message on their wall and mention this blog in the post. That will enter you into the drawing!

Here is the piece for the giveaway! It's a really nice wood grain burst!

All Things Drums
I have played drums for over 30 years. I started this blog to help small companies to get a little more exposure to main stream drummers.